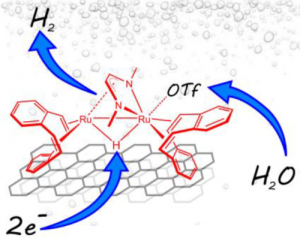 Researchers from the Institute of Chemistry of Organometallic Compounds (ICCOM) of the National Research Council (CNR) have studied the production of green hydrogen from water in the laboratories of Sesto Fiorentino (FI), discovering that this can be promoted by a dinuclear organometallic complex of ruthenium in a polymer membrane electrolytic cell (PEM). The study was funded by the MUR with FISR-2019 funds and carried out in collaboration with the research group of Prof. Hansjörg Grützmacher of ETH Zurich (Switzerland).

Water electrolysis is a process at the center of great interest for the sustainable production of hydrogen. In devices known as electrolyzers, the passage of electric current causes the splitting of water into its atomic components, oxygen and gaseous hydrogen. Current electrolyzers use platinum and iridium, both considered critical raw materials at risk of supply, whose continued use would not allow to guarantee the 100 GW per year envisaged by the decarbonization roadmap to 2030. Research is therefore aimed at eliminating these metals or reducing their quantity, increasing the durability and reducing the costs of the devices.

The apparatus built on a laboratory scale in the LAEM-CNR laboratories in Sesto Fiorentino produces 28 liters of hydrogen per gram of ruthenium per minute, without degradation of the catalyst after a week of continuous activity. “In our experiment, the metal content of the cathode electrode is less than half compared to the platinum present in the best performing electrolyzers known in the state of the art. Since every single atom is involved in the hydrogen evolution reaction, this results in a lower metal load for the same amount of hydrogen produced compared to systems based on nanoparticles. The next step will be the study of molecular complexes stabilized by inexpensive metals and widely available in nature”, explains Francesco Vizza, Director of ICCOM and coordinator of the study.